Put yourself in the position of an employer and think about the factors you would have to consider to determine where to place your business. The obvious ones would be proximity to market or to the resources you would need to produce your goods and services and get them to market. But where would “proximity to your employees’ homes” actually come in on your list? Most probably you would not even think about it.

Now put yourselves in your employees’ shoes. Getting employed is 90 percent of the challenge. As such, considering the time and cost spent on simply getting to that job probably isn’t the top consideration. And yet, for many South Africans, particularly those who have lower incomes, those costs, represented both explicitly as well as in time wastage, can come close to outweighing the actual value of the job.

Given South Africa’s specific challenges, the issue isn’t simply about creating more jobs. It’s about ensuring that both employees and employers get meaningful, optimal value out of that job.

Here is the issue. During the apartheid years, the Group Areas Act ensured that different communities were forced to live in townships, small towns or secondary cities – basically very far away from shopping centres and places of employment. People either had to walk to work, cycle or use minibus taxis, buses or trains. And back then, the condition of the roads made it impossible for some of these vehicles to get to rural areas.

Twenty-five years into democracy South Africa is still confronted will spatial inequality. This is mainly due to poor infrastructure, insufficient skills, weak governance and administration, which exacerbate transportation issues. But before we delve deeper into the issues, let’s take a look at the facts.

What mode of transport do people use and prefer?

The National Household Travel Survey (NHTS) that was last conducted in 2013 found that 41.6 percent of South Africans used minibus taxis as their preferred mode of transport to their place of work. This was followed by private cars at 13.7 percent, and another 13.7 percent who also used private cars but as a passenger. Buses and trains were the least used with 10.2 percent of South Africans preferring buses and 4.4 percent trains to travel to work.

How individuals determine their mode of transportation is most commonly based on punctuality or efficiency, distance, cost and travel time.

At least 32 percent of households indicated that travel time was the deal-breaker for them while 26.1 percent said it was the cost of transportation. This aligns to the above statement that the least used modes of transport were buses and trains. The fact that buses and trains also tend to have longer travel times than taxis and cars ultimately increases the cost.

Safety is another priority for commuters and is part of the reason for low usage of trains in South Africa. Trains tend to be under-policed, overcrowded and unreliable. On occasion people have said that when they get to the station, there is no train available even though it has been scheduled. In fact, 37 percent of train commuters have actually experienced this. In 2015, Passenger Rail Agency of South Africa (Prasa) spent R600 million on trains but passenger trips decreased by 67 parent in the 2018-2019 financial year. Commuters are voting with their feet. Trains are becoming an even less viable option.

Minibus taxis are the main mode of transportation for South Africans due to their accessibility, flexibility and, to some extent, cost. However, numerous complaints from commuters relate to reckless driving, often operating without a licence, and breaking road rules.

How much would a trip from Soweto to Johannesburg cost? 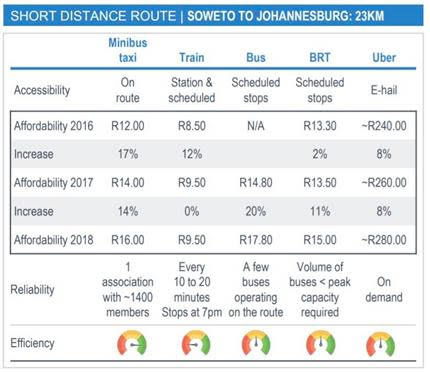 We can see that in 2018 the cheapest mode of transport were trains, but looking at the efficiency barometer, they were the least efficient. Train stations also close at 7pm, which can be problematic for those who work overtime. Taxis, however, seem to the most efficient at R16 a trip from Soweto to Johannesburg – the problem here though is that they can be unreliable during a strike because if there is only one association, all taxis would be inoperable. So there seems to be a trade-off between efficiency and cost – commuters tend to value efficiency more than cost, consequently paying more to use taxis than trains. But as mentioned, cost is an important factor that people weigh heavily when choosing their mode of transport. In 2017, two-thirds of low-income earners were reported to spend approximately 40 percent of their income on transport and it’s highly likely that this statistic is much higher in 2019.

How well do employers understand the implications?

The big question is: How well do employers understand the implication of commuting costs and time on their employees and what can they do to help?

Employee productivity and well-being are clearly implicated by both time spent on traveling between the home and workplace and the “quality” of that journey, that is, security, safety and just plain stress quotient. If your employee uses a taxi, it takes them 100 minutes on average to get to and from work and if they use a car, it takes them around 70 minutes. But these travel times could be much worse. According to Scott Mautz, a person who commutes for “60 minutes or more loses at least a week’s worth of productivity”. In South Africa, this means that we lose more than a week’s worth of productivity, so we really need to find a better way to mitigate this.

What employers can do

The critical question here is: Does the private sector simply sit back and wait until the public sector rises to the challenge of facilitating better transportation options, or do they step up to plate and provide solutions of their own?

Surely the days of “the company car” have come and gone, given that a new tax regime regards these options as fringe benefits and as such, fully taxable. Today, only 2.3 percent of employers offer this benefit of a company car.

But recently there have been some exceptions to this fringe benefit ruling if employers can demonstrate the need to facilitate a safer, more viable option to lower-income employees. This has opened up some highly innovative solutions, where employers can provide transportation services that not only provide Wi-Fi services and full security on the way to and from work, but which also notify employers of exactly when these employees are likely to arrive, ensuring that employers can adjust their schedules accordingly. 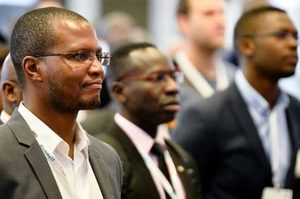 Other innovations coming into the market that employers could help promote or subsidise are mobile apps that allow employees to plot out those routes and modes of transportation both to and from work that offer the best value for money as well as expected travel times.

Getting it right from the start

But if employers want to really think the transportation issue through more optimally, the starting point should be a better consideration of where to set up their plants or production sites or service centres. In both Benefits Barometer 2017 and 2018 we devote chapters to two such options. The first involves our human capital management partner Mercer, who provides employers with a service that seeks out the best sites for maximising this multi-dimensional consideration: access to clients, access to market and access to appropriate worker skills.

Ultimately though, if we are going to get to the heart of the transportation problem, we need to go back to a point we started with: South Africa’s problematic spatial legacy from apartheid. Breaking down these barriers will demand a complete rethink on how to defuse the monopoly that Johannesburg, Pretoria, Durban and Cape Town hold over business as being the only viable locations.

In our 2018 Benefits Barometer we laid out some of the most exciting work to date on this issue. This was a comprehensive study done by Professors Marianne Mathee and Waldo Krugell on identifying what other parts of the country showed the most promise as “second-tier cities”. It would provide a new start on integrating employee well-being with optimality in business site selection.

The point is, we simply do not have the luxury of relegating a discussion of transportation for employees to the back burner. Getting a solution right here will be critical to South Africa’s growth and productivity ambitions. But one thing is clear: neither government nor employers will be able to resolve this alone. It will most decidedly take a multi-stakeholder collaboration here.

HR Indaba Conversation looks at the intersection of office politics vs. culture

It’s important to differentiate between office politics and culture and respond appropriately to each.

How employers respond in times of a crisis is what employees will remember.

Panellists discussed how HR can be a catalyst for helping people on the automation journey.

Panellists agreed that dealing with grief should be carried out in a diverse and inclusive manner.

Panellists discussed whether leaders are born or made, and why self-awareness is key.

An HR Indaba Conversation looked at how human capital policies and processes need to be revaluated.

HR professionals discuss what it takes to develop a learning culture in their organisations.

Top HR leaders share their top approaches to finding agility during times of change and disruption.