HR executives blown away by Inaugural CHRO Day at Marble

Top HR leaders delved into self-care, looking after staff in times of crisis and retaining talent.

More than 100 HR executives gathered at the exquisite Marble restaurant in Rosebank, where they shared thoughtful insights on issues taking centre stage in the HR space.

The ambience was upbeat and electric from the moment guests arrived to when they were ushered into the bar area where they first had their photos taken by professional photographers, and all through the rest of the thought-provoking day.

After the photos, the HR executives enjoyed a selection of divine canapés while they were mingling and catching up, after two years of not seeing each other in person due to the Covid-19 pandemic.

After the small chats, attendees were escorted to the dining room where the official programme of the day started.

CHRO South Africa managing director Joël Roerig welcomed guests and thanked them for their attendance. He also extended some words of thanks to the partners who made the event possible, including Momentum Corporate, Mercer, Sanlam, Servicenow, Workday, Floatpays, the Gordon Institute of Business Science, Health impact and SkillsTown.

Before things got serious and while delectable starters of avocado ritz, beetroot carpaccio and Marble Caesar salad were flowing, Joël asked the attendees to fill out a survey for a R5,000 gift voucher prize sponsored by Momentum Corporate. The winner of the voucher was Mercer South Africa’s consulting lead, Carla Daniels.

He then introduced global speaker, author and Al Qaeda’s longest held prisoner, Stephen McGown, who shared a tear-jerking story of how he was taken hostage by Al Qaeda in 2011. 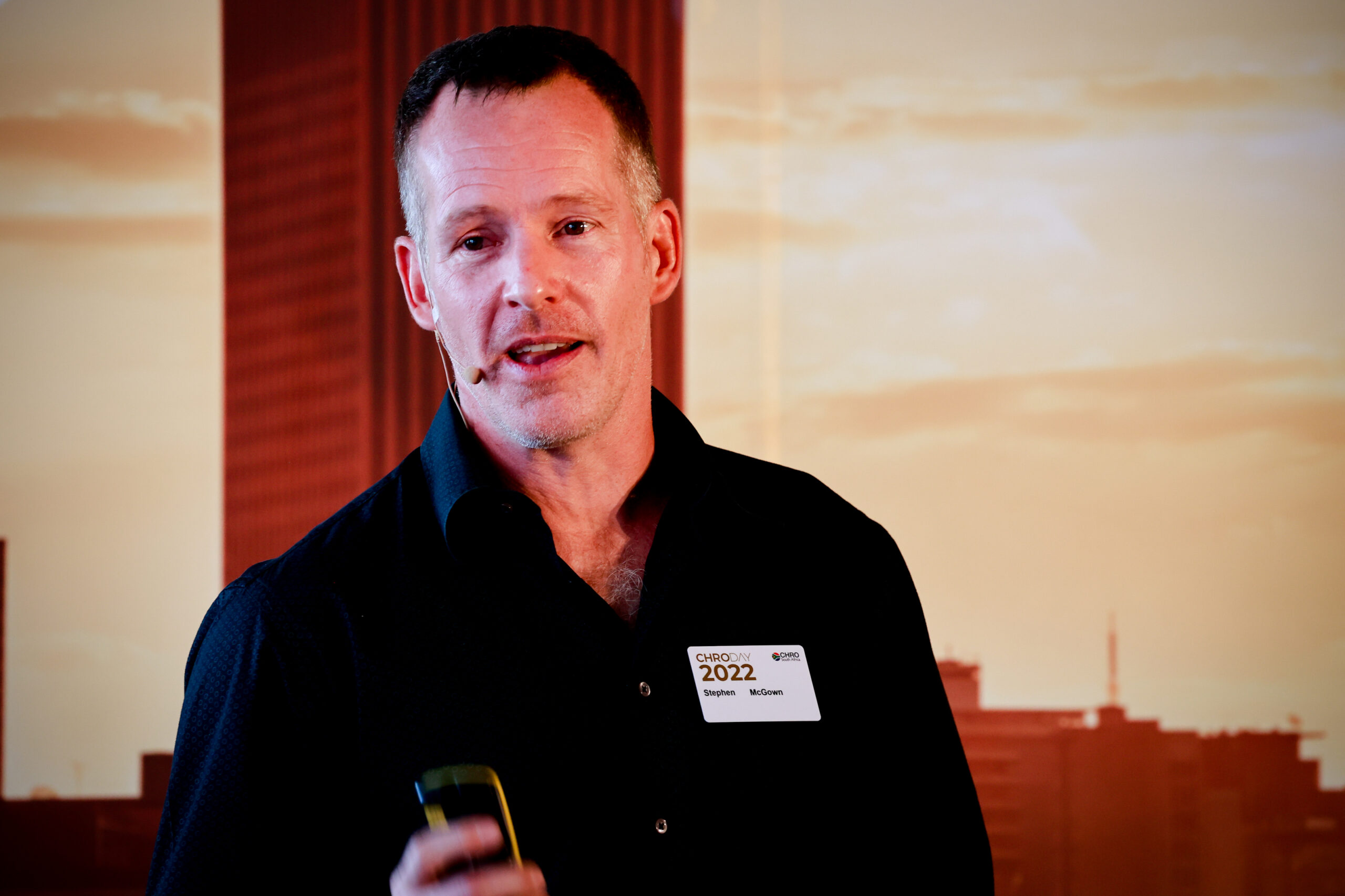 Being the good narrator he is, Stephen kept the attendees glued to his riveting story of what was supposed to be an adventurous and eventful trip through Africa, but which turned out to be a nightmare.

Sharing the gory details of being a prisoner, Stephen spoke about how he and other hostages used roots to brush teeth. For food, he and the other captives had to hunt down tortoises, birds, gazelles and rabbits.

Stephen shared that he was able to draw positive aspects from his situation, including learning that being resilient and staying true to himself is important. He said his ordeal had also taught him the importance of making decisions.

He told guests to never be complacent and to not forget who they are, no matter what situation they are in.

“I realised I had to stop giving my energy or I wouldn’t cope. I had to keep my head above the water. One of the profound things I realised is that we start to forget who we are and what our strengths are. I realised it is easy to have an impact in a situation when you know who you are,” Stephen said.

In this discussion, Edwin revealed that strike action, sexual harrassment, assault, disrespect and racism were some of the leading reasons of upsetting among mine workers.

“I made the point that if these five issues were resolved, there would never be another strike again for some years to come, and I was laughed at,” said Edwin.

He added: “I proved my theory right, that says, when you propose something and deliver on that proposal, your colleagues are automatically confident in your abilities and you get buy-in from them, because you delivered.”

Carla shared that metrics on the number of skilled positions versus the number of positions that are not filled by skilled individuals, and how that gap can be closed, was one of the biggest trends in metrics for financial reporting. 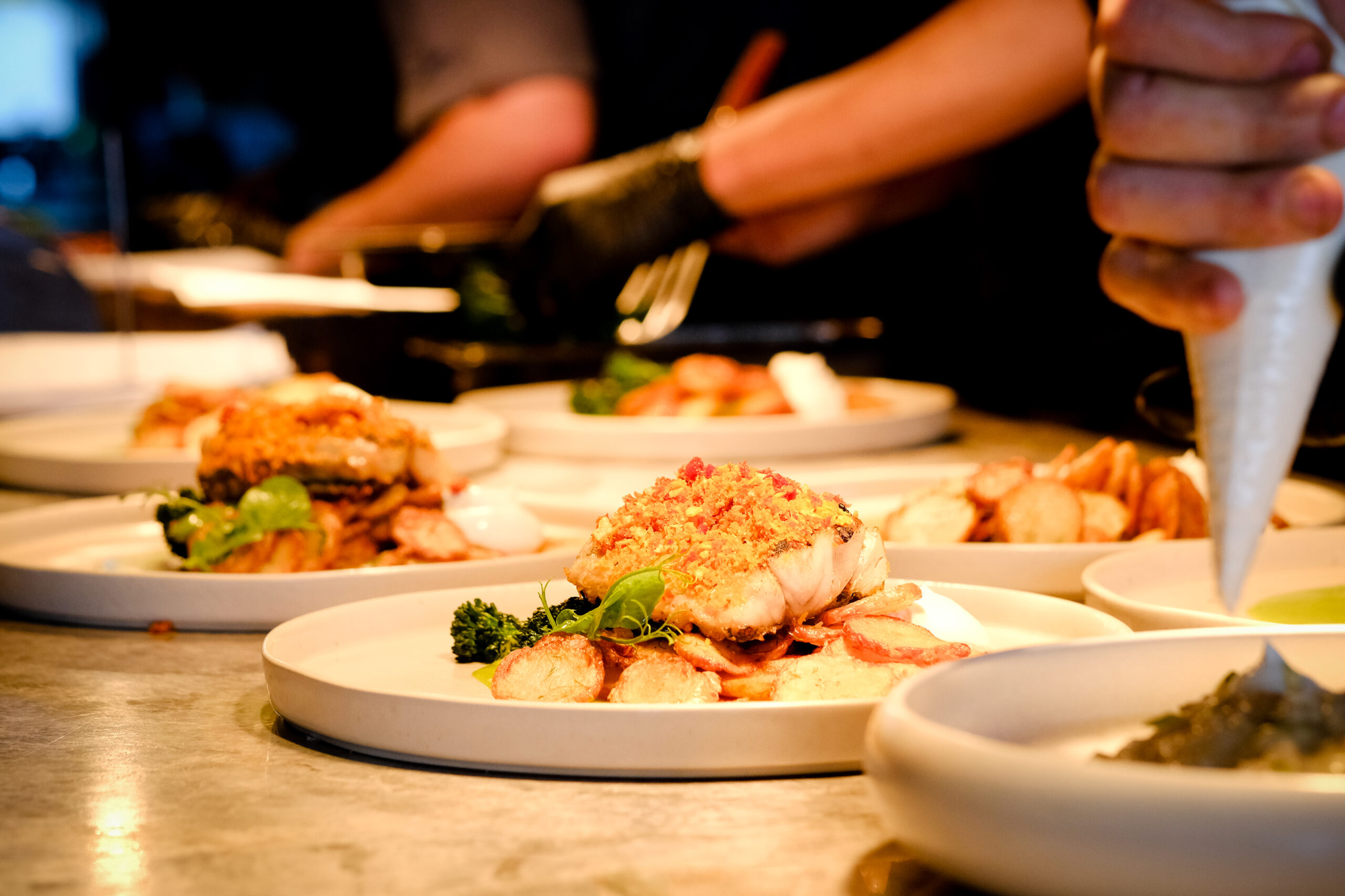 While they were digesting the insights from Edwin and Carla, attendees indulged in a delightful main course and had a choice between sirloin steak, grilled line fish and creamy risotto. They also enjoyed some entertainment from Puns and Things, who started off with a mish-mash of song and spoken word in a medley about superheroes – in this case, our HR leaders. Strength and perseverance were the main messages, and attendees were captivated by the amazing vocalists.

After attendees were serenaded by the glorious melodies of Puns and Things, they turned their attention to a discussion on being born anew during times of crisis, which was led by Sun International Group HR director Verna Robson and ACSA HR director Lungile Langa. 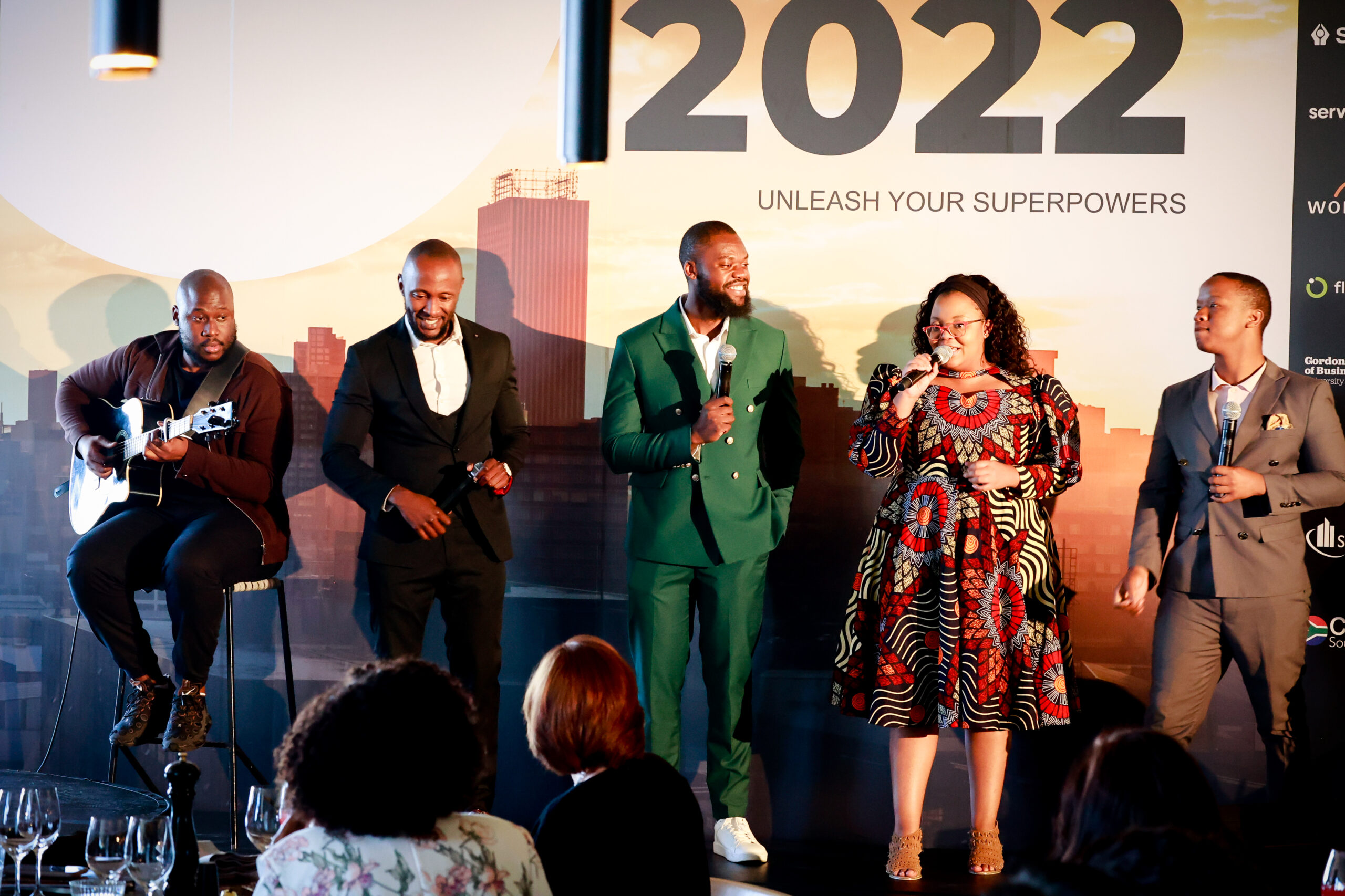 Both HR leaders shared the strategies and plans their companies had to put in place during the Covid-19 pandemic, and how they took the crisis and turned it into an opportunity to bring about positive change.

Lungile shared that transparency was key during the period and beyond. “It was important to show people the numbers,” she said.

Verna admitted the task the company was faced with at the time was difficult. “My days used to start at 6am and end at midnight. I think you need to take care of yourself, otherwise you will not survive. It was a very daunting period,” she recalled.

In another session, guests were engrossed in Standard Bank's chief people and culture officer, Sharon Taylor's presentation on a range of topics including what the company has done differently in the last two years and what kind of leadership an organisation should have.

"You’ve got to pick leaders for the role that they play and not because they want some senior position with all the perks.  Leadership is a calling and unless you can engender followership, you are not a leader. Leadership is not about a position, it’s about what you can achieve and whether you can take people with you on a journey," Sharon said.

As the day progressed and after guests had enjoyed a selection of scrumptious desserts, award-winning organisational psychologist and career coach Phiona Martin led a discussion on the talent war. She explained that it’s a real phenomenon and that most companies were facing it. “Companies that develop employees become talent magnets themselves, which is tied to talent retention,” she shared. 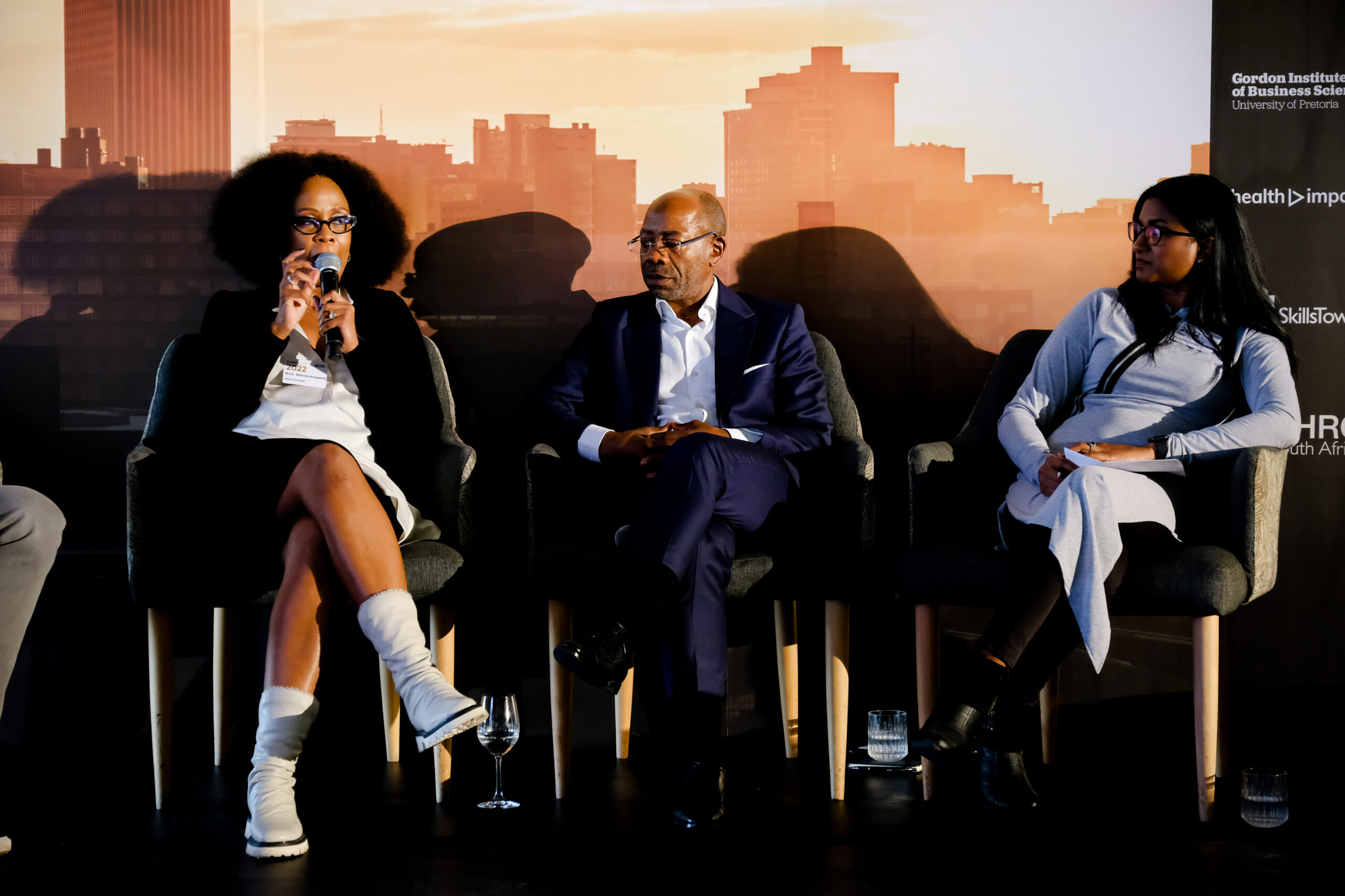 Moula shared that Covid-19 had changed the way of transacting. “We’ve moved from physical transactions to virtual transactions. We reach our candidates, clients, consumers and our communities virtually and boards have not been spared from that change in how it is that they conduct their work.”

Parmi emphasised the importance of succession planning: “The last thing you need when an organisation is on the growth trajectory is to have a leadership vacuum.” As critical as succession planning is, Parmi said it was often neglected.

Bonang touched on excellence and said leaders should constantly ask themselves if they are continuously learning. “The day you feel, even as a CEO, that ‘I’m no longer learning’, even after three years – that’s an indication for you to leave it to younger, cleverer, more educated and highly productive people,” he said.

With the emotional roller coaster ride the guests were taken on and the lessons they learned from the discussions held, CHRO Day proved to be a resounding success.

Candice Watson has never been shy to push over hurdles in order to achieve her goals.

For Ndima Rawana, integrity, ethics and honesty are key to running a successful company.

The energetic HR leader is using the people agenda to support business growth.

It was through a happy accident that the HR leader’s career path into auditing changed.

The energetic leader believes in the value of showing up in the moment.

Rand Refinery’s Unathi Sihlahla is a stranger to impostor syndrome