CHROs are grateful to have been able to relax and unwind while they made scrumptious courses.

You would have been forgiven for thinking that the HR executives who attended CHRO South Africa’s first ever cookout held at The Cookery in Craighall, Johannesburg, were in an episode of The Final Table or on one of Gordon Ramsay’s cooking shows. The stakes were very high and each participant – including CHRO team members – brought out their best culinary skills in an attempt to outdo each other on the 13 courses that the witty, friendly and energetic chef Emilio Coccia assisted them in preparing. Milo, as he was fondly referred to, shared a story behind each of the dishes the participants cooked – from risotto and gnocchi to creamy chicken and luscious green beans. 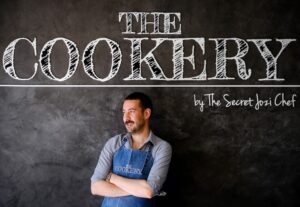 The teams started the cookout by preparing tapas, which included fried halloumi. These were shared among the teams while they were busy preparing other courses.

Solly Mathebula, head of HR at Heineken, said he had a great experience at the cookout.
“It was nice for us as HR leaders to come and unwind and get away from all the hustle and bustle. I loved this event and I’m looking forward to the next,” said Solly. “The event was well organised. I loved our chef Milo. He led the teams to cook beautiful meals.” 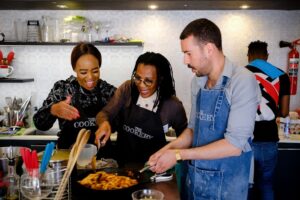 Dolores Mashishi, managing director at DSM Advisory, said the event was “interesting” as they as HR leaders were able to step back and enjoy being outside the confines of their jobs. “As HR leaders we always advise our staff members to relax, but we never do it. CHRO today gave us that opportunity. When I walked in there was music playing and the ambience that welcomed me, immediately turned up my mood.”

“We got into cooking, which cuts off the work talk and it became about us. Personally, cooking has become therapy for me, so I was in my happy place. I cooked vegetable pasta which was mixed with vegetables.”

The event for her was “liberating” as she was able to share her own experiences with the participants and listen to others’ stories. “The model that CHRO SA uses to bring CHROs together is a winning model. The key thing they do is to get the HR community to learn from each other and know each other,” Dolores said. 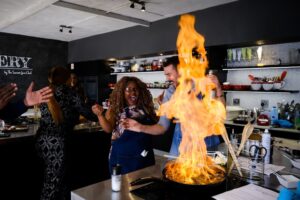 Penny Hlubi, HR director at Bosch, said the event was “sterling. It was a lovely buzz, which is one of the things I miss about South Africa. There was so much a sense of family. Yes, we do get together, and CHRO organises the best events. It was good to let our guard down and do something that not only we enjoyed, but learnt a lot from – particularly because I get teased on the webinars because I’m always cooking by the time I dial into them! To actually experience chef-like cuisine was a stepping stone for me.”

Her highlight was the flambé she made. “When they say the pots are on fire, I made the fire on the pots!”

Lethabo Tshakuma, head of people and organisational development at Heineken, said the event was refreshing. “I have received a lot of invitations from CHRO before, but I never had time. However, our boss said we should go and play with other kids. I was expecting to be in a boardroom, but when I came here it was a relaxed environment. I was happy it was not formal and we were not talking about strategies,” she said. 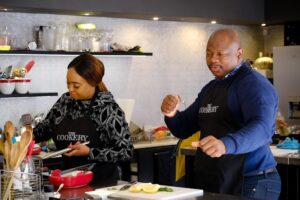 She said she enjoyed cooking and the scrumptious food she got to make and taste. “We cooked creamed chicken and risotto, which was something I was making for the first time. I feel so refreshed. It’s important for us, especially in HR, to pause, cool off, play and breathe. I am grateful CHRO organised this event.”

Bridgestone Southern Africa has announced the appointment of Karen McDonald as its people director.

Marlize Kriel has been nominated for the 2022 CHRO Awards

The HR director at Hellmann Worldwide Logistics – Africa, has been nominated for her role in HR.

The market HR cluster head at Google believes HR should be seen and heard.

Harambee announces the appointment of Mpho Motshegoa as its talent and culture head.

Enid Lizamore has been nominated for the 2022 CHRO Awards

The Group Executive Head of HR at Santam Insurance has been nominated for her role in HR.

John Skelton has been nominated for the 2022 CHRO Awards

The Capital’s Chief People Officer has been nominated for his experience in HR.

The HR leader says being in her position at the age of 30 is a dream come true.

Mpho Mazibuko has been nominated for the 2022 CHRO Awards

The head of HR at Mediamark has been nominated for her extensive experience in HR.

The HR executive has a passion for people that shines through in her work.

Kim McCallum has been nominated for the 2022 CHRO Awards

The chief capability officer at Vantage Data has been nominated for her experience in HR.