In an unforgettable evening of excellence and entertainment, the winners were announced.

On a clear summer evening on 27 November, 250 HR professionals gathered to celebrate the leaders in their profession. The executives came out in their finest evening wear for a gala event at Summer Place, a suitably glamorous venue for the exceptional talent and leadership on display, rallying to the theme of the evening: “Your sky is the limit.”

After networking at the poolside cocktail area, with an array of delectable canapes being served, the HR community were ushered into the glittering banquet hall where the serious business of handing out the awards was to take place. 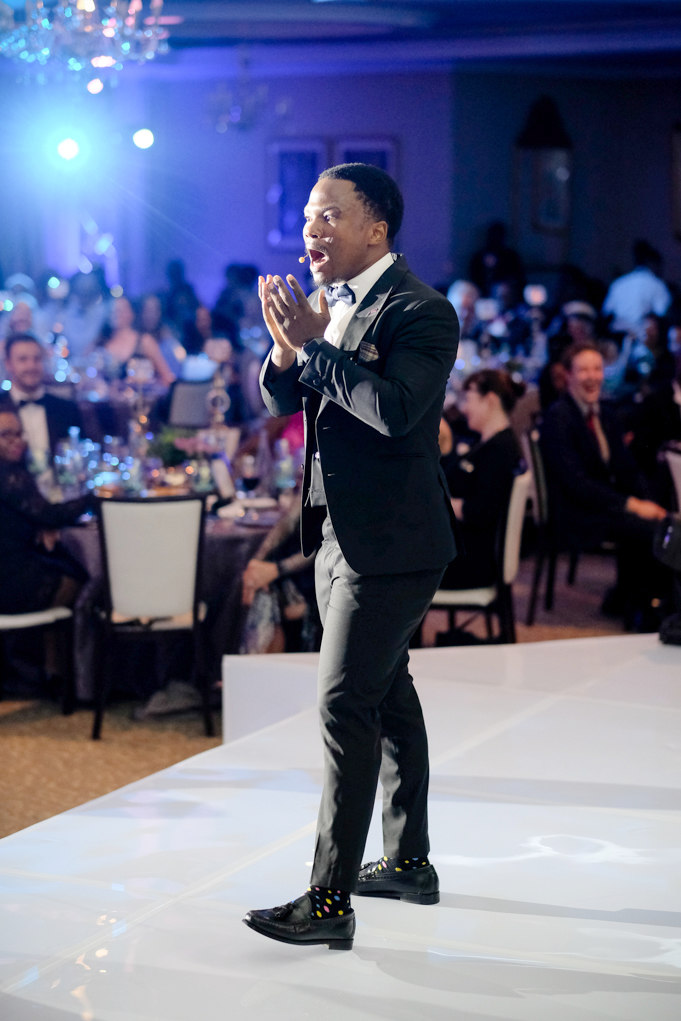 Comedian Loyiso Madinga was the evening’s host, and he launched into an opening comedy routine that highlighted the employment practices of three of South Africa’s presidents to appreciative laughter from the audience. He then introduced Joël Roerig, the MD of CHRO South Africa, who gave the audience ringside insights into the CHRO Awards judging process.

Joël said that he was confident that the inaugural CHRO Awards would be the beginning of a very long tradition of celebrating excellence in HR.

He congratulated the 19 nominees, and the teams supporting them.

“The CHRO Awards are part of our broader focus on building a CHRO community - a trusted, safe space for HR professionals. As you can see from the exceptional attendance here tonight, it's a massive community that enjoys getting together, so we're looking forward to engaging you in many more networking and knowledge-sharing events. "

He added that the event wouldn't have been possible without the support of its awards sponsors, Workday, Oracle, Momentum Actuaries and Consultants, and ClarkHouse Human Capital, and thanked them for their support over the years, and at this event in particular. 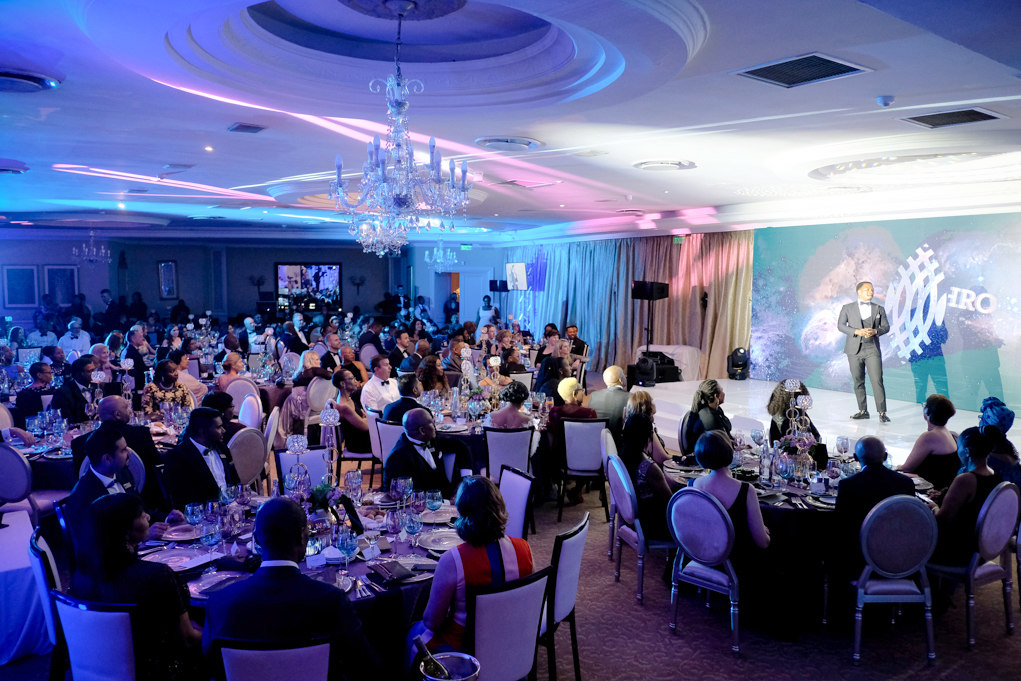 He explained that each nominee had been through a two-hour interview, which was collated into a dossier to be circulated to the nine judges. “Thank you to the nine judges who put in so much time and effort,” he said.

And finally, he shone a spotlight on the 19 nominees. “Your dedication to building better teams and achieving better results has been noticed. You are highly inspirational to us all.”

All 19 nominees were then invited on stage to receive their trophies in recognition of the momentous achievement of being nominated and participating in the intensive interview process. HR guru Shirley Zinn handed out the trophies, and all the nominees were met with thunderous applause. 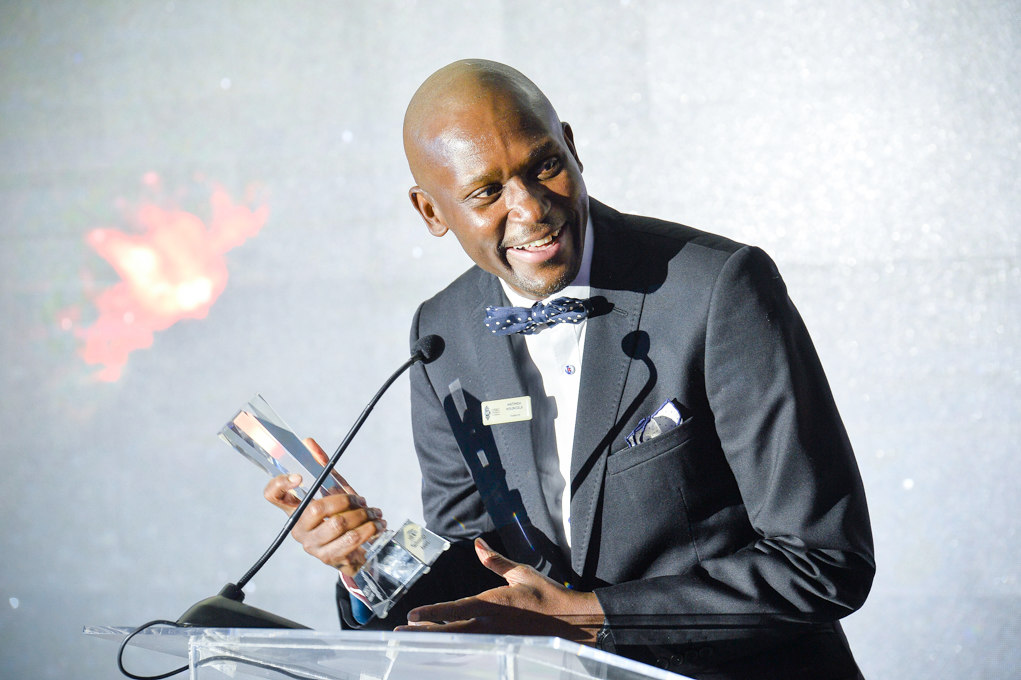 Then it was time for the first award, the HR & Technology Award. Vukani Mngxati, managing director of Accenture in Africa, came to the stage to hand the award to Matimba Mbungela, group CHRO of Vodacom. Matimba thanked his wife and his children, and also his team. “I am just a shining star for my team. The universe belongs to them – the Vodacom HR team are exceptional and this one belongs to you.”

Next up was the Transformation & Empowerment Award, handed out by Deborah Booth, a director of ClarkHouse Human Capital, who sponsored the award. It went to Sharon Taylor, head of human capital of Standard Bank, who said that this was an incredibly special award for the bank to win.

"With a footprint all over Africa, this is a true testament to our purpose: Africa is our home and we drive the growth."

She added that the award was an endorsement of the good work done by the bank’s leadership, with Sim Tshabalala at the helm, who Sharon added has in the last 24 months been recognised one of the global “HeForShe” champions – the first on the African continent. 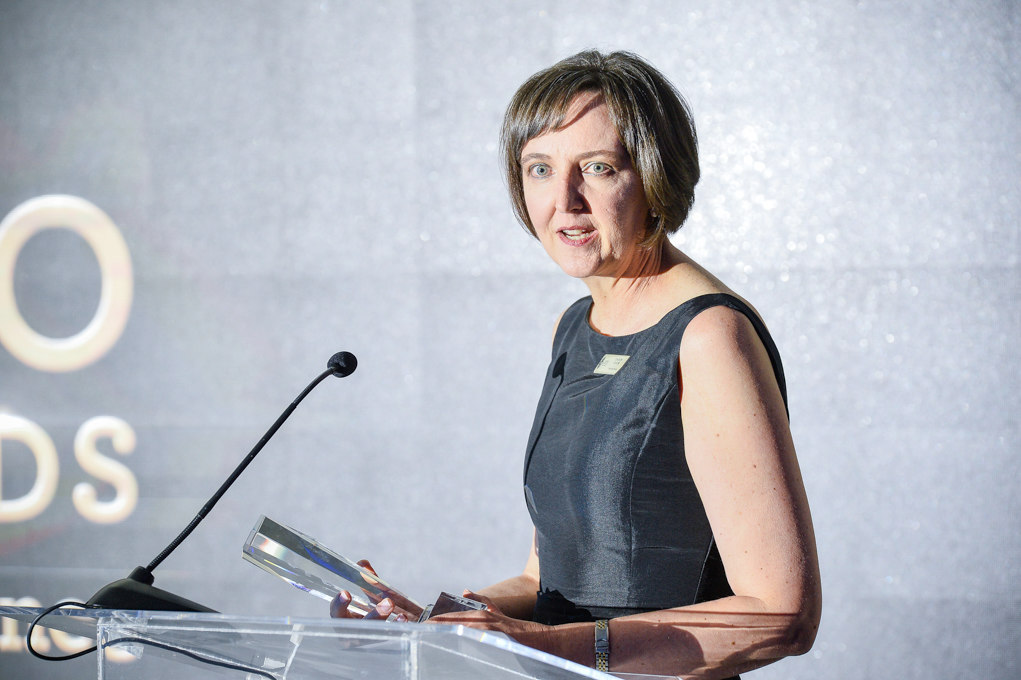 This was followed by the Strategy & Leadership Award, handed out by George Ferreira, Senior sales director at Oracle, the award sponsor. This award also went to Sharon Taylor who confessed to not having perpared another speech. She once again mentioned her team, saying that they’d had an incredible opportunity this year to influence the purpose of the group and where it’s going strategically.

“There are three levers for us. The purpose of our organisation, the leadership that drives it, and how aligned we are behind what it is that we need to do. We are creating an environment that people can thrive in - and I could never have achieved this without my team. " 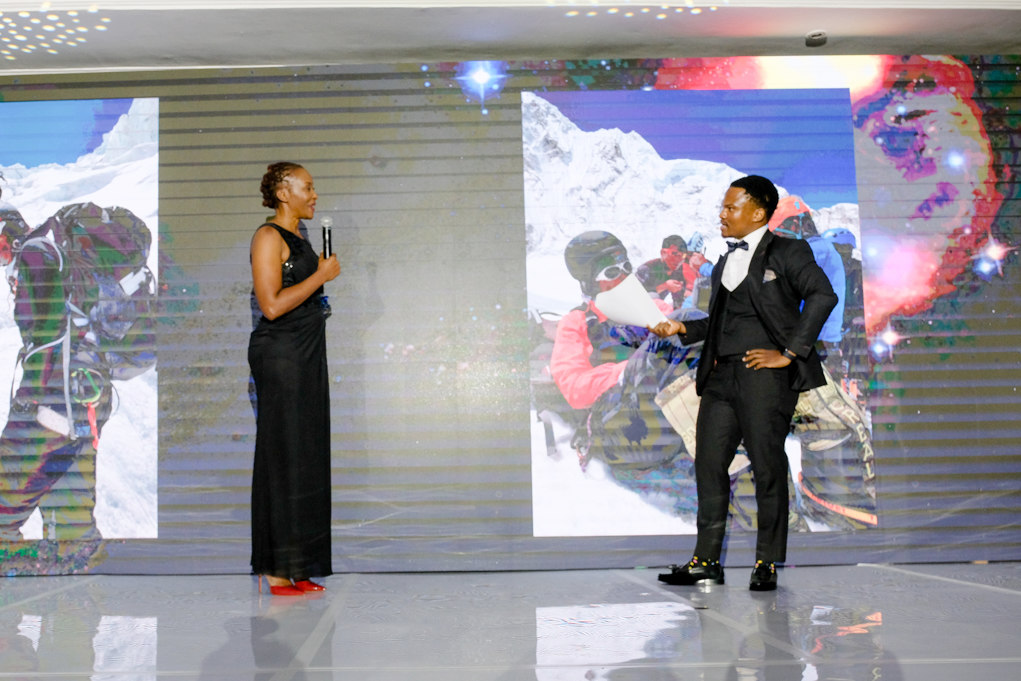 In keeping with the theme of “Your sky’s the limit”, Loyiso then welcomed Saray Khumalo, the first black African woman to summit Mount Everest who shared with the audience how she’s raised R1.3 million towards education and literacy in Africa through mountaineering. Her lesson for the audience, having failed to reach Everest’s summit three times before finally succeeding in 2019 was, “It’s only a failure if you fail to learn from it. What I did in 2019 was because of those other summits that went before.”

She’s now completing the Grand Slam – summiting the highest mountain on each of the continents, plus visiting the North and South Pole. In doing so, she is raising money for Education for All, which is an initiative by the Regenesys Foundation to help students get a degree.

Read more: Saray Khumalo: I climb alone with the hopes and dreams of many

With Saray's words of wisdom ringing in their ears, the audience was ready to hear the winner of the Employee Value Proposition Award. This was handed out by Blessing Utete, executive director of Momentum Consultants and Actuaries, to the winner, Verna Robson, group executive for HR at Sun International . 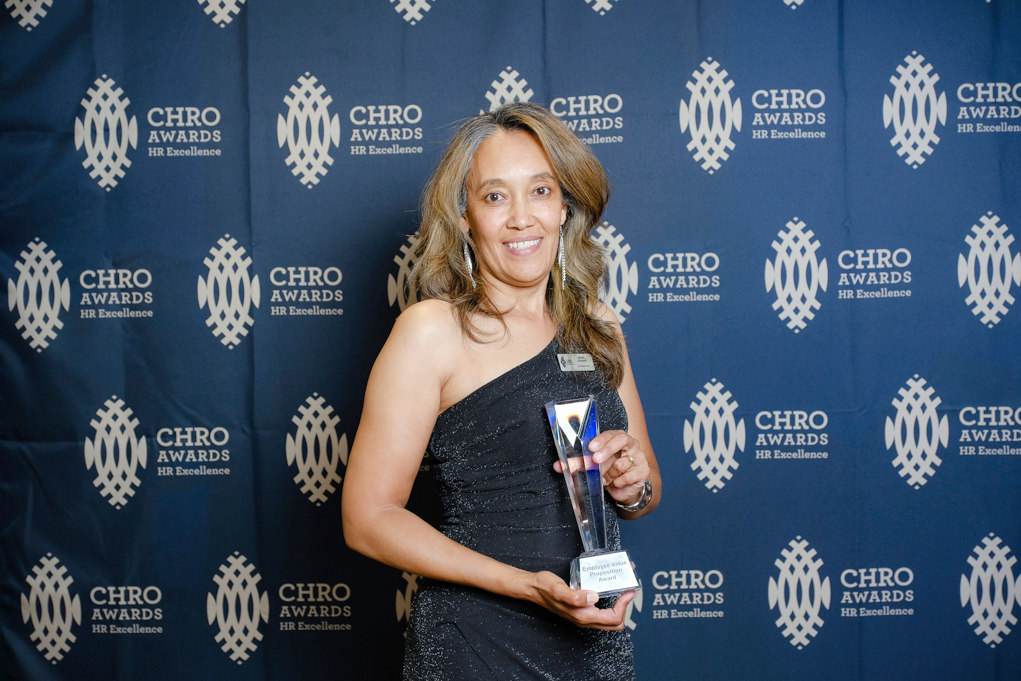 “I'd like to say thank you to my team. It's a team effort to make sure our 10,000 employees know what we're all about. It's been a three-year journey and it's been great, so thank you so much, "she said.

The Talent Management Award was next, handed out by Moula Mokhobo-Ameghashie , awards judge and managing partner of Drayton Glendower & Mokhobo, and won by Paul Norman, MTN Group CHRO. "I will be very short," he said. "Thank you very much. It's a great privilege to be honored like this among so many incredible nominees tonight."

Paul had a quick return to the stage to receive the Learning & Development Award, handed to him by Professor Nicola Kleyn , dean of the GIBS Business School. "I'll be even shorter," he said. “A great thank you to my team at the back. This is for them. " 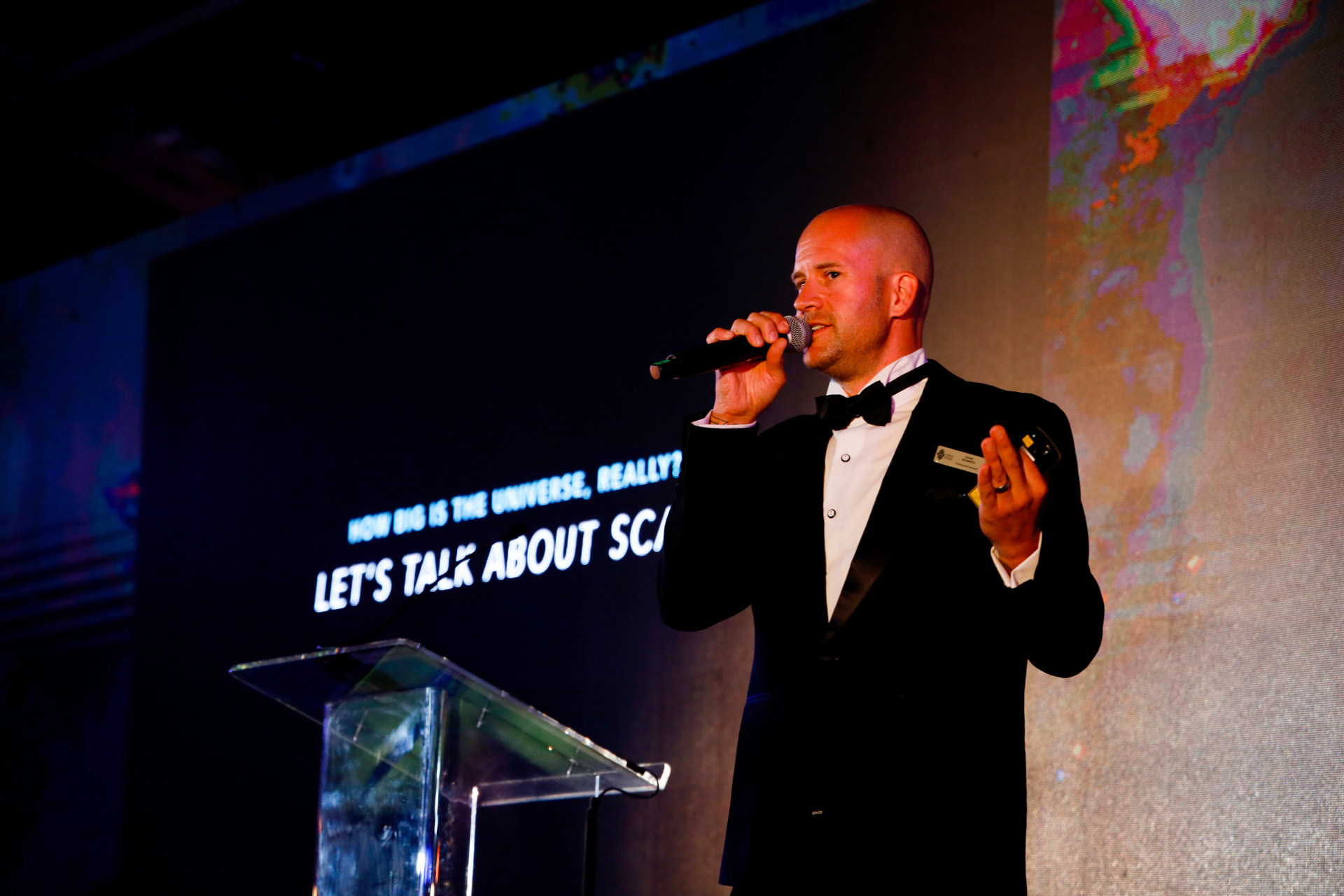 Astrophotographer Cory Schmitz then came to the stage to share a horizon-expanding message with the audience of HR professionals. While showing his remarkable night-sky photography, he explained the massive distances that separate us from the stars. But then, he explained to the audience, we are entirely made up of star matter.

“Everything on Earth is made from stars. Every molecule in your body could only have been made from exploding stars at some point in history - that's the only thing that creates enough energy to make carbon atoms. You are all stars. You are the universe. We are connected and everyone matters because we are all stars. "

The penultimate award of the evening was the Young CHRO of the Year Award. When announcing the qualification requirements for the award - that the CHRO has to be under 40 - Loyiso quipped that these are more generous limitations than offered by the ANC Youth League. 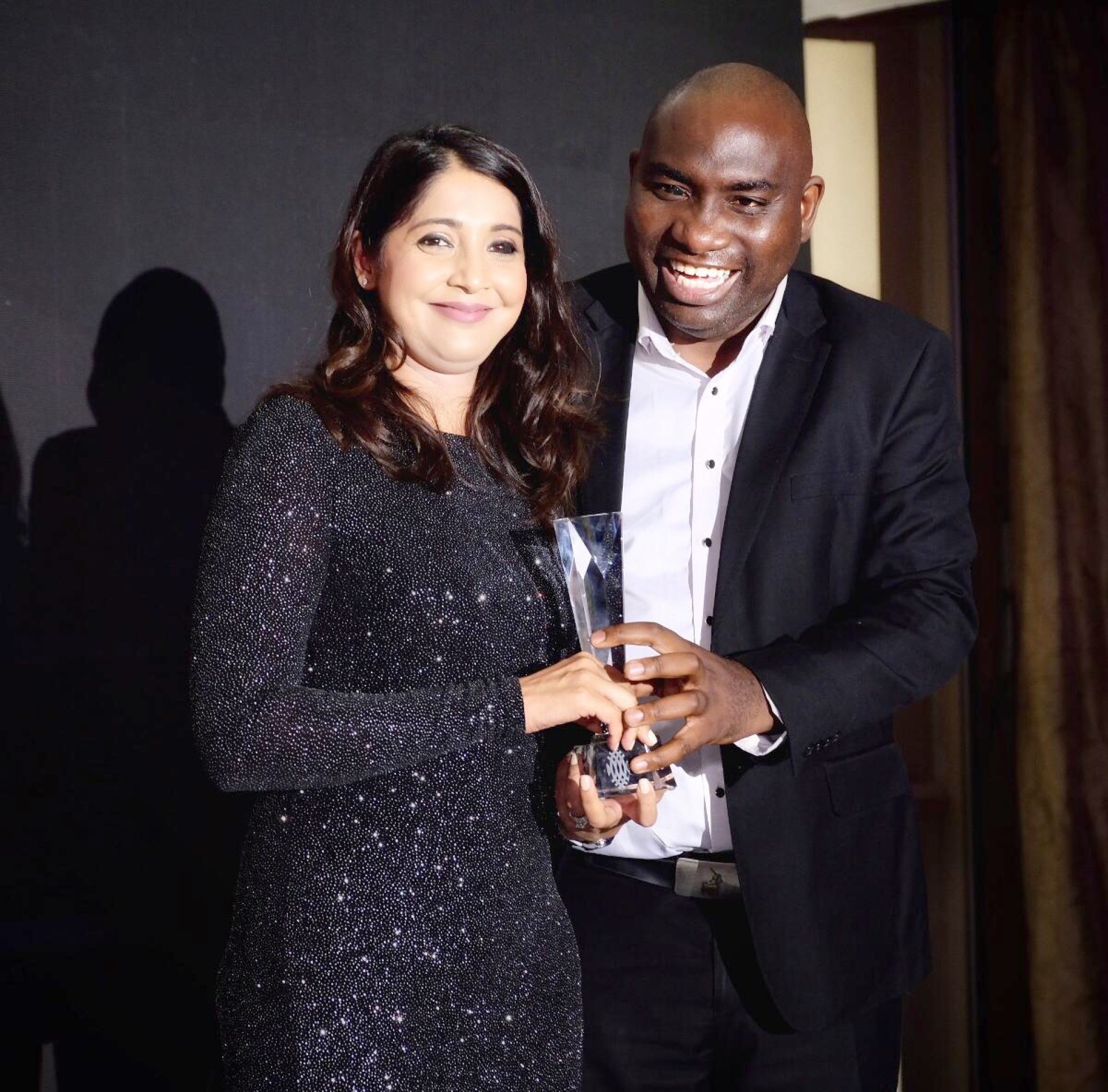 Trishana Maharaj, HR and Health and Safety Director for Africa at G4S, was declared the Young CHRO of the Year. She received the award from Xolani Mawande, CEO of the SABPP.

“Thank you for CHRO South Africa for this. This is an award for the 300 HR people that I work with every day running the largest company in Africa, and the fabulous exco that I work with. Thank you! She said.

And finally, with a flourish, Loyiso introduced the award that everyone was waiting for - the CFO of the Year Award. Handing out the award was Zuko Mdwaba, the country managing director for Workday. "It gives me great pleasure to announce the winner of the CHRO of the Year Award, Mr Paul Norman." 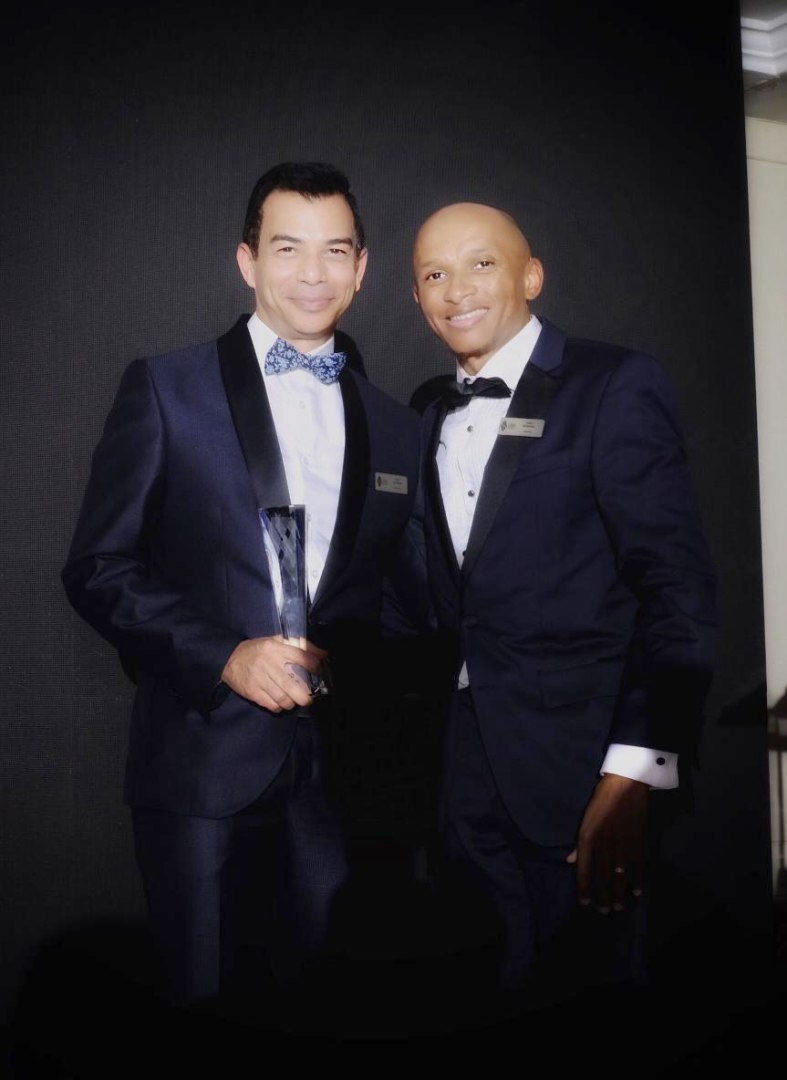 Paul is clearly a well-liked and respected member of the HR community because this announcement was met with deafening applause and a standing ovation that lasted until Paul took his place on the stage.

“I guess I have to say a few more words,” he said. “Thank you to CHRO South Africa and the judges. I am quite humbled by this recognition. It speaks a lot to what we need to be in South Africa. That presentation we heard about the stars and how we are all the same – I think that in many ways, we in the HR profession have a role to play in bringing that humanness into the country.”

He thanked his wife Tracy for keeping him on the straight and narrow and his “work wife”, his PA Nontutuzelo, for doing the same at MTN, before concluding, “Thank you so much for this. It’s a great honour and I really appreciate it.”

As the evening drew to a close, it was clear from the smiling faces and sense of warm camaraderie that the aims of the evening had been achieved – top CHROs were celebrated and the awards were entrenched in the community’s hearts and minds as the highlight of the HR calendar. 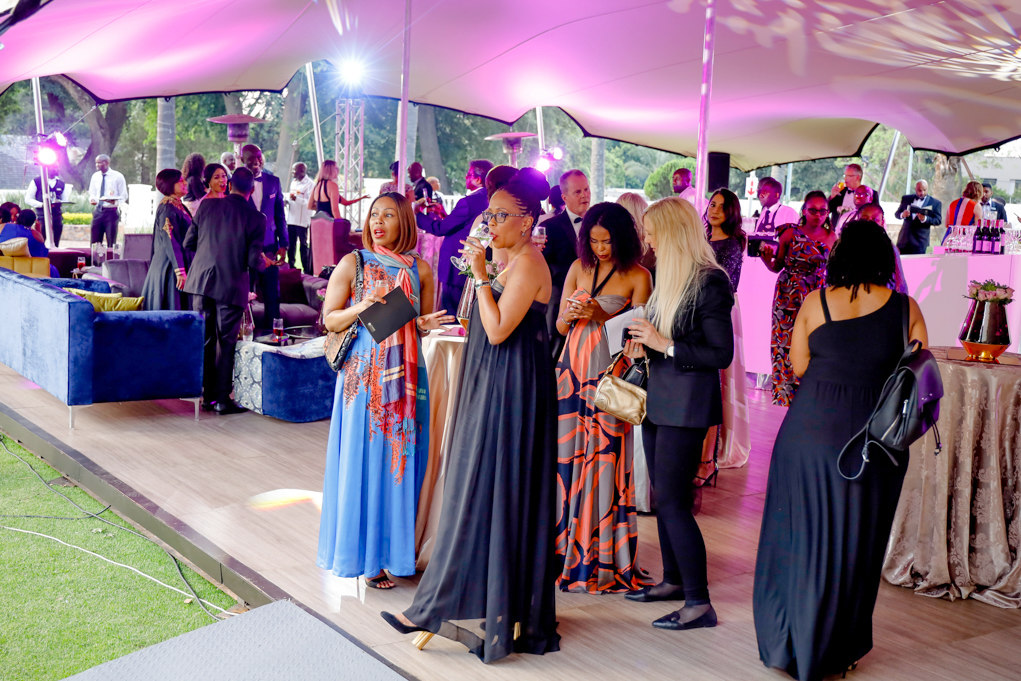 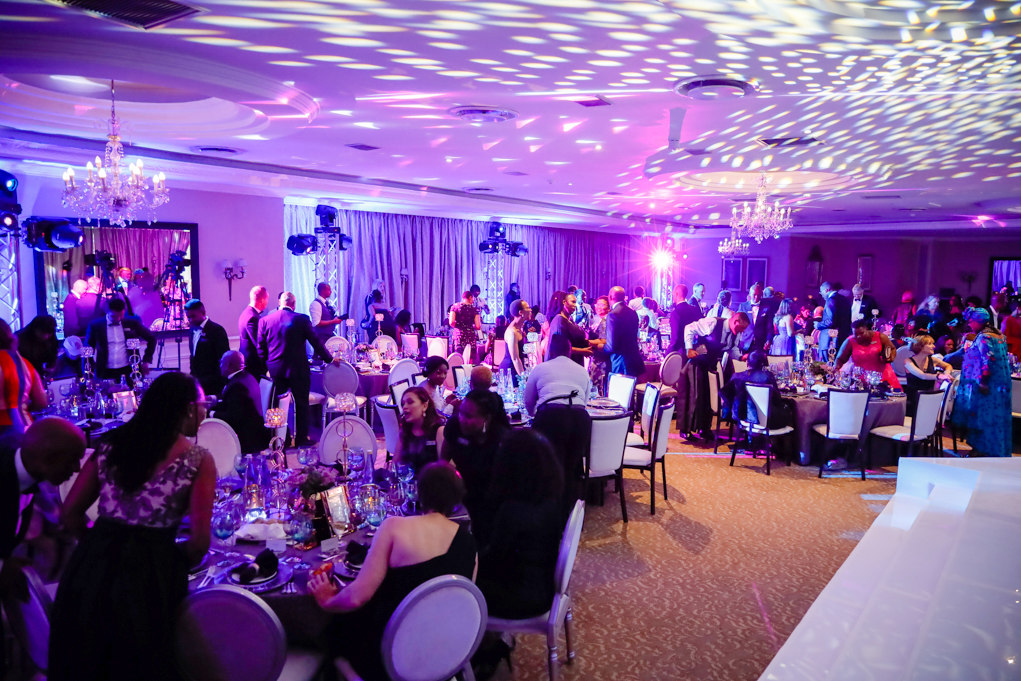 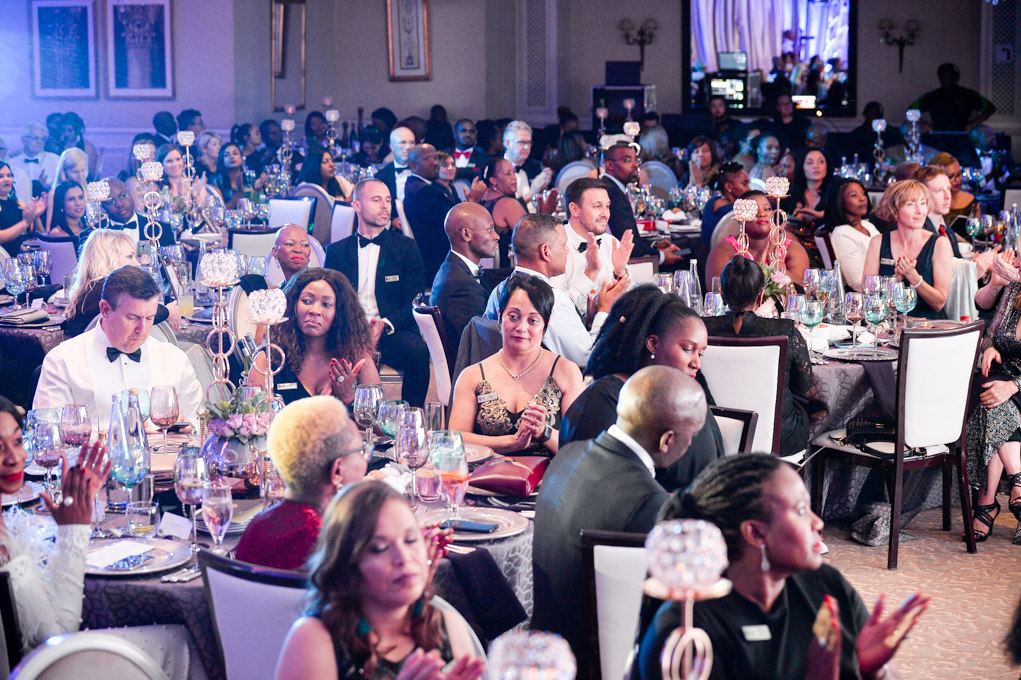 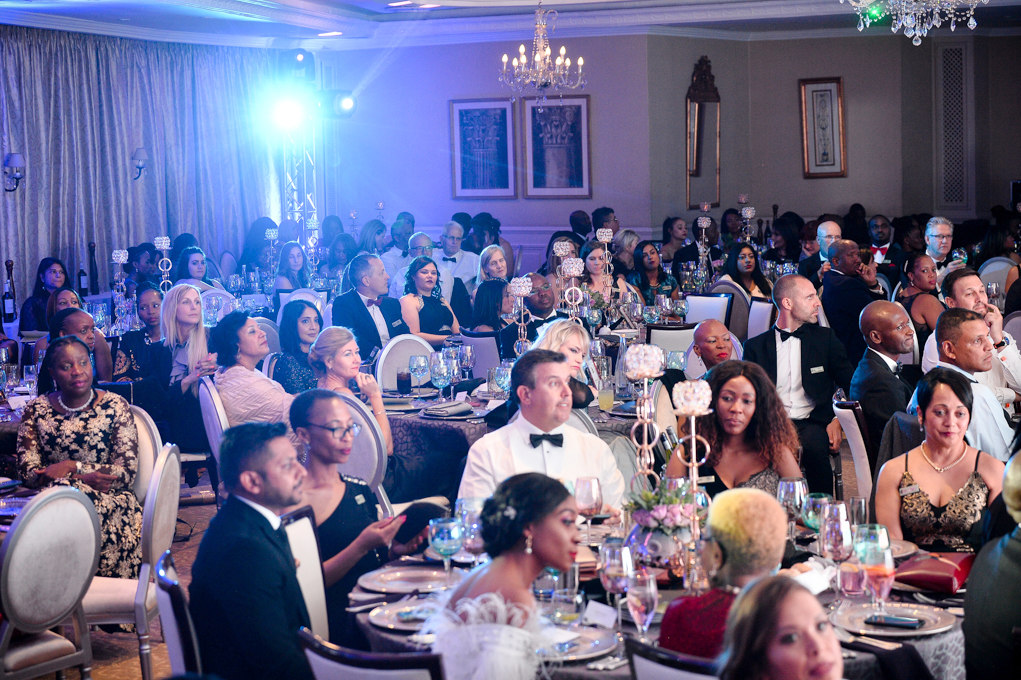 The CHRO Awards delivered an evening to remember for a community in need of celebration.

Dieter Veldsman named 2021 CHRO of the Year, for his work as CHRO of Momentum Metropolitan