The second annual CHRO Awards were an evening of celebration and gratitude.

Held on 26 November 2020, the CHRO Awards recognised five outstanding CHROs for the work that they are doing on the human side of business. The winners received their awards before their peers in an elegant gala dinner held at the prestigious Inanda Polo Club which provided a tranquil backdrop.

With 150 of South Africa’s top HR executives gathered, the evening served as a reminder of the calibre of excellence the fraternity enjoys and, after months of being apart, South Africa’s top CHROs revelled in seeing their counterparts in person. Under the skies of a gorgeous Joburg summer evening, guests were treated to marimba music, delicious canapes and cocktails as they mingled.

Adorned in bold black and white decor accented with gold, the ballroom was the perfect setting for the delicious three-course menu curated by leading Johannesburg caterers Word of Mouth. At what was dubbed the “Oscars of HR”, the evening’s master of ceremonies, comedian Loyiso Madinga, regaled the crowd with his side-splitting jokes.

Recognising the significance of these awards, the MD of CHRO South Africa, Joël Roerig said that the event was a nod to the remarkable contribution the HR industry has made:

“The CHRO Awards are the highlight on the annual calendar for HR executives and the teams that support them,” says Joël Roerig, managing director of CHRO South Africa. “HR has gone through a massive transformation over the last few years and HR practitioners have become real drivers of vision and value. The CHRO Awards can be seen as the Oscars of HR, where the best and bravest HR role models are acknowledged and celebrated.

This year’s 20 nominees are all exceptional leaders in their own right and truly deserve their accolades as nominees and winners.”

In his opening address Matimba Mbungela, CHRO of the Vodacom Group and a longstanding member of the CHRO community invited attendees to give themselves a well-deserved pat on the back for the difference HR practitioners had made in their companies during the Covid-19 crisis.

He said that as the people who shape employee experience in organisations, HR leaders had succeeded in inspiring those around them and given them a sense of belonging in the world in an uncertain time. He also highlighted the strategic role HR has served in navigating tough issues such as pay cuts, retrenchments and other decisions. He said the voice in a way that safeguarded morale and demonstrably valued employees.

“HR has shaped interventions that kept the workforce safe, engaged and inspired during the pandemic. We influenced decisions and introduced policies such as no-meeting days to support our people as they had to navigate remote working, delivering to the company and meeting responsibilities for family.” 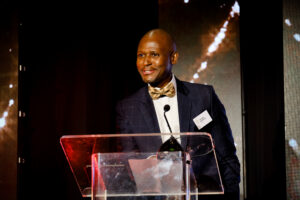 Expert Claire Janisch delivered a presentation with fascinating insights about how business can learn from nature and the opportunities we are faced with to design a future that honours nature and uses it as a blueprint for solving problems or destroys the planet we inhabit.

This year, 20 nominees vied for the coveted awards. Discovery chief people officer Tswelo Kodisang was named South Africa’s CHRO of the Year. He walked away with three of the eight accolades awarded on the night, also winning the Strategy & Leadership Award, and the HR & Technology Award.

Tswelo expressed his pleasure at winning, but insisted that his accomplishments are a result of powerful collaborations and teamwork, saying that, “when you surround yourself with great people, they make you greater.” Another big winner at the prestigious event was second-time nominee and McDonald’s SA chief people officer Brigitte Da Gama, who won the Transformation & Empowerment Award and the Talent Management Award. She dedicated her awards to her team and said her role is more than a job but calling that allows her to fulfil her purpose every day.

Kyle Chetty, the executive for HR at Autoboys, was crowned Young CHRO of the Year shared how honoured he was for being recognised and acknowledged the people who had guided him and offered him opportunities for growth. Investec head of people and organisation Lesley-Anne Gatter won the Employee Value Proposition Award and she said that the award belonged not just to her, but those around her who share a common vision and lead with the desire to make a difference. Tiger Brands CHRO S’ne Magagula won the Learning & Development category and shared how meaningful she feels her work is in transforming people’s entire careers and how honoured she was to be recognised for her contribution.

While the awards recognise the winners in their various categories, the purpose of the event was to celebrate the hard work and achievements of the CHRO community as a whole. After a year of very little in-person interaction, the attendees took this purpose to heart and made the most of the first, last and only event on the CHRO community calendar this year. 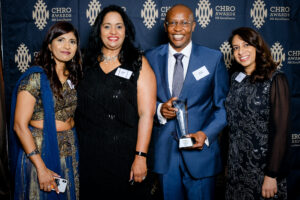