Courage, honesty, communication, tact and knowing where and how to draw the line - those were some of the recurring themes during a powerful conversation between HR executives at the first ever CHRO South Africa summit in Cape Town on 13 March 2018.

With HR execs in the room from big brands like BAT, RCL, Sanlam and Oceana, the level of the discussion at the historic UCT’s Graduate School of Business premises was high. Reputation was identified as something that should not only be safeguarded, but also grown and developed. Together with moderator Graham Fehrsen (MD CHRO SA), the panelists Shelagh Goodwin (General Manager: Human Resources Media24), Jeanett Modise (CHRO Sanlam Investments) and Mills Soko (Director at summit co-sponsor UCT-GSB) made the conversation extremely relevant and practical. 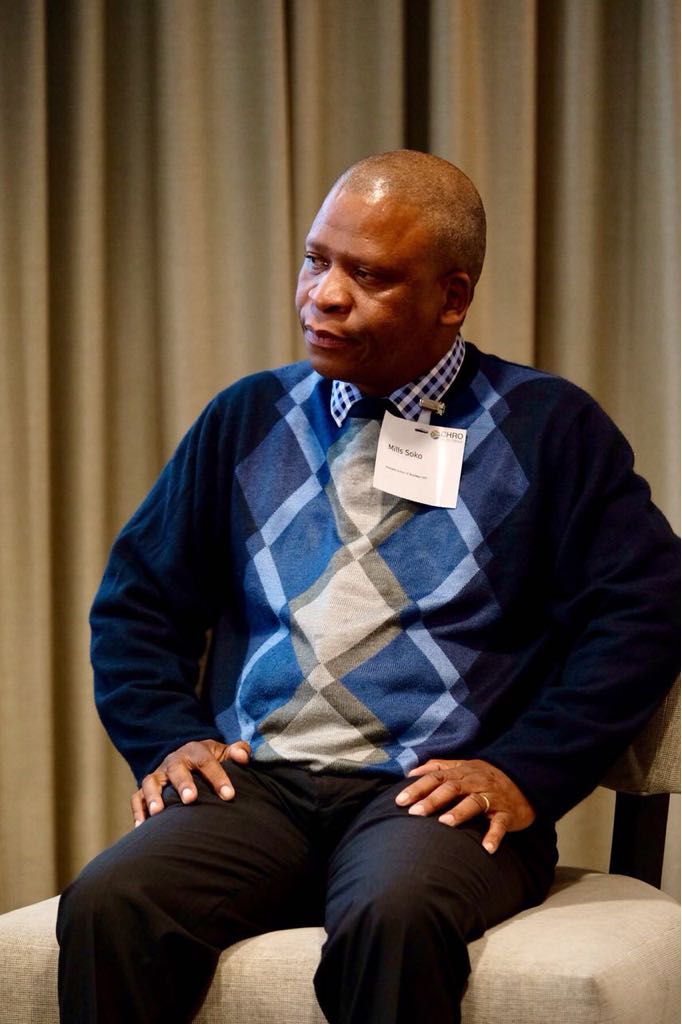 During the Workday-cosponsored event, Mills (pictured on the right) sketched a picture of the UCT’s business school as an environment where very vocal stakeholders like students and alumni have unrelenting high expectations of the institution. He chatted about the role of risk registers and the roadshows he undertook across and beyond the country to “address perceptions” and ask questions.

Out of Media24’s core values, Shelagh identified courage as the most important. She recounted her colleague’s hesitation when an annual staff survey was about to be sent out in the middle of a painful restructure. “People were afraid that we would be scored lower than average, but the result was astounding. They saw honesty from management. We didn’t sugarcoat it. And that was appreciated.” 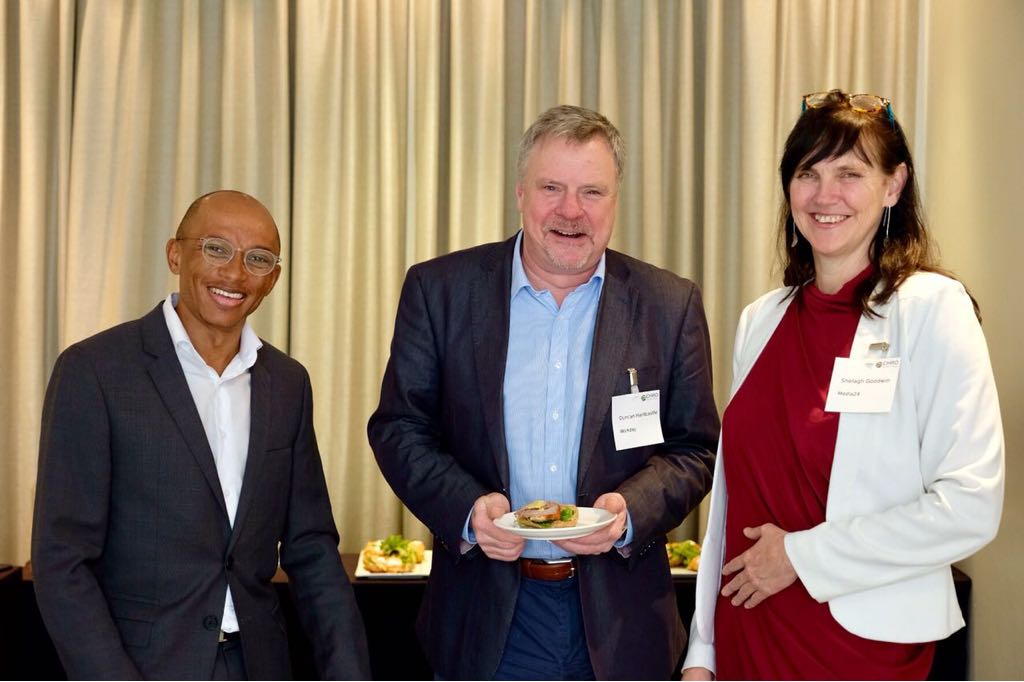 Shelagh (pictured left with Workday's Zuko Mdwaba and Duncan Hardcastle) also chatted about last year’s “major fail” and reputational crisis, when a blog posts on the Huffington Post website turned out to be fake and intentionally penned to be inflammatory. “This was about owning up. We were wrong. The editor stepped down, which was very hard for her. But you need to be honest and have the decency to look the customer in the eye.” Jeanett also gave some insight in Sanlam’s crisis management scenario planning, with Mills adding that one of the brooding risks business as a whole has to manage is a growing antipathy and suspicion against business. 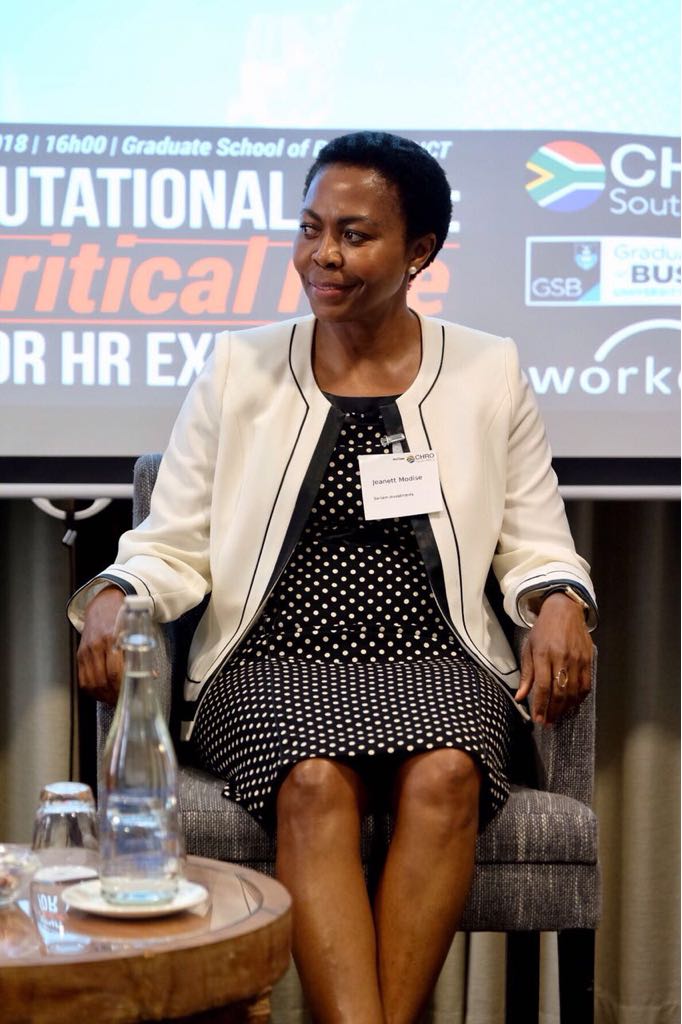 BAT’s HR head Leslie Rance then asked from the audience for some guidance around dealing with powerful colleagues when they don’t live the values of the organisation. “Sometimes we underplay the powerful role we have as HR leaders,” replied Jeanett, indicating that the responsibility for the right leadership team is a big one. “Tact is very important and I always make sure I have all the facts. I ask difficult questions. It is not only the reputation of the company; your own reputation is also on the line.”

Jeanett (pictured bottom right) told her peers about an instance where she and the CEO were at loggerheads about the future of an executive and they eventually agreed to give it three months, after which they both presented their arguments to the board. “As CHROs, we have to be assertive, without being arrogant. Of course, there is always a risk, but we need to bite the bullet.”

Several times during the conversation the need to live the organisation’s stated values and the importance to make employees brand ambassadors were discussed. “People want to be heard, even if you can’t always do something about it at the time. That is why I believe in creating an inclusive, transparent leadership style.”

Malisha believes that being vulnerable is a credible and authentic demonstration of your humanity.

At Nando’s, employee wellbeing is core to building resilience and is seen as a passport to thrive.

The key is to not overthink it and to keep your old relationships warm, says Ncumisa.

Sigrid believes they could be the solution to many questions around the future of work.

HR executives joined a Community Conversation to share how they are coping with 2021.

The future of recruitment: AI will assist rather than replace hiring teams

International experts and local HR leaders share their views on the evolution of recruitment.

Henley’s Jon Foster-Pedley explored how leaders have had to change how they manage people.

Old Mutual has implemented Workday HCM to help fundamentally change its relationship with its employees.

Discovery’s Tswelo Kodisang presented a case study on how AI has transformed the company’s people function.

CHRO Community Conversation hears about the importance of a unique EVP

Head of human capital Linda Roos says she believes people should not be exited based on age.