The CHRO Community Conversations, hosted in partnership with Workday, have been a great platform for HR leaders to ask each other questions, exchange ideas, blow off steam and compare notes of what it's like to be in charge of the people agenda during the Covid-19 pandemic.

Also a former strategy and planning director, Leslie has had extensive experience using scenario planning in business, before recently becoming a partner at Mindofafox, a firm that specialises in this area of strategy development, facilitation and learning.

Leslie made the point that looking back to life before Covid-19, the world might have seemed "normal", but it wasn't. There were, and remain, some global flags (indicators) that could usher in significant change.  Some of the major flags he pointed to include: the Green Flag on global warming and climate change, which continues to wave high up the flagpole; the Grey Flag of an ageing consumer population, particularly in Europe, or its flipside - a young population in Africa with high unemployment, all threatening global consumer growth;  the Religious Flag with ongoing persecution of religious minorities, and the National Debt Flag in some countries such as the US, and now increasingly so in South Africa. He also pointed to the Anti-establishment Flag, which has changed the political terrain in the US, with widespread implications for the rest of the world; as well as in the United Kingdom, manifesting in Brexit, and other major global players, such as Brazil. The Pandemic Flag has been flying for a while with more than a handful of examples - in recent times, the SARS outbreak, Avian Flu, Ebola, and now, of course, Covid-19, all showing to different degrees the devasting possibilities of potential pandemics.

Leslie presented some Global Post Covid-19 scenarios, anchored around two key uncertainties: scenarios driven by a more united ‘one-world’ versus a more divided world, reinforced or mitigated by either a global recession or continued global growth.  One such scenario, characterised by a ‘one-world’ view, points to future global growth driven by reshaped industries, with Covid-19 having accelerated the technology factor, firmly adjusting organisational ways of working, reimaging work culture, and opening up new doors for what skills need to look like and where they can be sourced.

The other scenario, of global growth in a divided world, has ‘immigration heavy’ globalisation being questioned, and the ‘all-our-eggs-in-one-basket’ approach of heavy reliance on consolidated global factories, in one country, China for instance, being reconsidered.

"Protectionism and geopolitical tensions in this scenario are more prevalent, with countries and regions driving increased, but insular, economic growth.  All of which will have consequences for the shape and work opportunities of many businesses, as well as the mobility of their workforce, in the future," said Leslie.

Despite South Africa coming into Covid-19 facing significant economic challenges and criticisms of the government’s handling of the economy, early and decisive action by the government in introducing stringent lockdown measures to protect the wellbeing of its people were widely applauded, domestically and abroad.  With a supportive citizenry, interventions by the Solidarity Fund, and the government’s R500 Billion financial support package, social cohesion was high to begin with.

Said Leslie: "Post-Covid-19 possible futures could include the country losing its grip on both economic growth and social cohesion leading to a ‘free-fall’ scenario, requiring significant effort to pull the country back.  Alternatively, a ‘mind-the-gap’ scenario of pushing forward with economic growth, but with low social-cohesion, will further entrench the significant inequalities that exist in South Africa.  If we took the ‘business-as-it-was-before’ approach, then it wouldn’t be without significant future risks.  A more sustainable future scenario, 'Nkosi Sikelel' iAfrica', is where the country grows back stronger than before, prioritising an inclusive economy that addresses unemployment and inherent problems in education."

Leslie asked HR leaders to guess which of the four scenarios was most likely to prevail, with many of the participants saying they expected South Africa' economic growth bounce back but without strong social cohesion, because of the many systemic gaps not being sufficiently addressed in the short-term, whilst others feared the worst-case scenarios, a dip into free-fall. 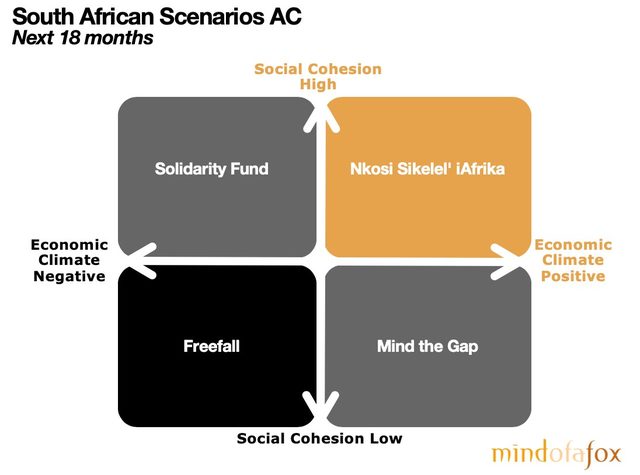 HR leaders were then engaged on what their businesses could look like in any one of those scenarios, making the point that change does not affect all businesses the same, as seen with Covid-19 and its exceptional effects on Tourism, Aviation and the Motor Industry, as opposed to Food and Healthcare Industries as examples.  Leslie emphasised that in any plausible future South African scenario, HR as Business leaders need to help their organisations reduce the scope of uncertainty, by identifying what is predictable, defining the meaning of winning in each scenario, and preparing their workforce to make a success of their organisation’s most likely business scenario, all the while being agile enough to adapt to any eventuality.

Everything changes so quickly

HR leaders put forward what they thought was the most likely scenario to prevail before going into breakout discussions where they discussed their own scenario planning journeys.

“Sometimes, a business gets so entrenched in survival mode that we don’t look at different scenarios and that's where we have to play a role as CHROs – to point out some of the blind spots regarding people that the business might have,” said Tsebo Solutions Group CHRO Elanie Kruger, added that in their business they have done a lot of scenario planning.  They have sessions with experts, like economists, to provide thought-provoking insights and different perspectives around the future and what it may hold for businesses like ours.

“But what I have found particularly interesting is how quickly things are changing requiring active decisionmaking,” she said.

Elanie said scenario planning, in this climate, did not have to be a very formal process. To the contrary, in today's world where decisions have to be made very quickly, it may even be better to have quick discussions about very specific issues.

Said Elanie: “We can sometimes look at three or four different scenarios for the way we engage with a particular client for example, and something like that can really make a difference in adjusting our mindset and rapidly responding as a business. Things have been changing so rapidly that having formalised and extensive processes for scenario planning was simply ineffective. So you have to take a more bite-sized approach if I can call it that, and try to focus on shorter time-frames because it's just impossible to forecast anything much farther far beyond that.”

Lafarge South Africa HR Director Tshidi Dabula agreed, saying they did their scenario planning before the Covid-19 hit but have had since to review their plan and “change our course and ensure we are aligned with this new world that we are living in. Unlike before, when scenario planning was meant for the long term and medium-term forecasting, we are now living in a time where we have to plan for the short term. Companies are now considering different scenarios for the coming two-to-three months instead of two-to-five years as would normally have been the case pre-Covid.”

The Community Conversation ended with HR leaders left with something new to think about regarding the way they approach scenario planning in their respective organisations.